Bazilionai Church of St. Basil the Great and complex of the parsonage buildings

Bazilionai church of St. Basil the Great standing in Bazilionai town on the right affluent of the rivers Deglė and Dubysa, on the left bank, bears the forms of traditional architecture. In 1749, owners of the Padubysis Mill, Jonas and Antanas Beinoras invited monks of the Congregation of Saint Basil who built a church and donated some land to the monastery. A higher parish school was established by the monastery in 1773. By 1793, it was reorganised into a four-grade regional school. Bazilionai town and Mekiai village (19 Wallachs) belonged to the monastery in 18th century. In the beginning of the 19th century, there was a wooden single-storey monastery and a school. It was closed in 1835. After a year, the monastery was closed and handed over to the Orthodox. The church was transformed into the Orthodox one. In 1900, a project of a new Orthodox church was approved. However, the church was reformed back to a Catholic one in 1918. The first Catholic Holy Mass was held on 8 September 1918. This church was a fillial church of Kurtuvėnai parsonage. In 1933, the existing wooden church was built. 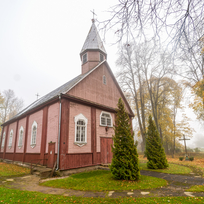 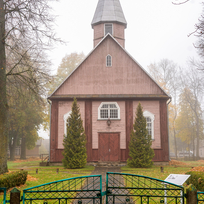 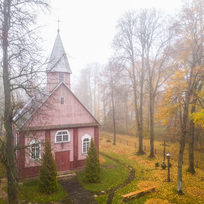 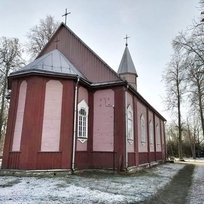