Rekčiai mound (also known as Vinava hill) is on the right bank of the Venta, at the confluence of the nameless brooklet. Here, people lived and fought since I millennium BC to the mid-14th century. A fore settlement of 0,7 ha was on its north-east side. The Mound has an almost round area of 6-7 meters in diameter, surrounded by ramparts. In the northern side there used to be a terrace of about 25 m long and 13 m wide. The slopes are steep, 8-12 m tall. The top of the embankment was once destroyed in preparing the dance floor. Standing away from other ancient defensive centres, Rekčiai mound always raised interest and aroused imagination of people. Even before World War II, it was believed that a church stood on the hill, which later sinked down. There was also a cave and a mysterious sound was heard if a stone was dropped into it. Once a shepherdess found the priest's chasuble, a book and a woolly scarf at the collapsed slope. Yet, it was also told that a tearful child‘s voice calling pigs was heard from the mountain once a year in the evening. 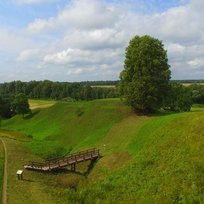 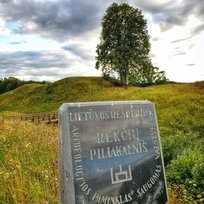 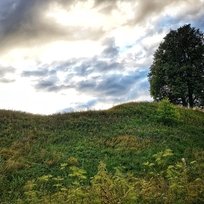 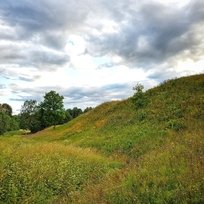 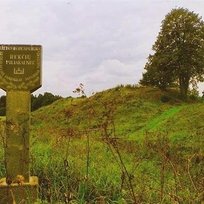