Two interesting pines are preserved in the village of Dirvonai. People consider them holy. A cross is fixed to one of them, and a chapel to another one.

Back in time, when Bazilionai had no church, inhabitants of the village of Padegliai used to go for worship to Kurtuvėnai. At Dirvonai, worshippers used to stop to pray, greeting the Kurtuvėnai church from a distance. Older inhabitants of the village of Sodeliukai heard from their parents that the pines were marked back in 1912–1914. There are several unusual stories about that. One of the story tells:

Once an old man, called Liaudins, died in the village of Dirvonai. On their way to worship, after dark, people used to meet the deceased dressed in black standing near the pine. Having suspicions that the deceased was led by the devil, villagers nailed the cross to the pine. After that, the goner vanished.

Story of the chapel is not as creepy as the previous one: a man who came from Piktuižiai had a dream of the Virgin Mary. She asked him to build a chapel. The man made a nicely carved, green-painted chapel with a figure of the Virgin Mary in it. The chapel was hanging there for a long time, when once vahished during the war. Soon after, another appeared in its place, but was also destroyed by somebody. Currently, the fourth and rather new one is fixed to the pine.

In 2004, the two Dirvonai pines were declared the botanic objects of natural heritage preserved by the municipality. 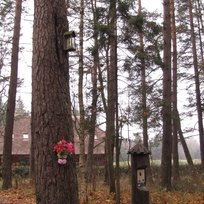 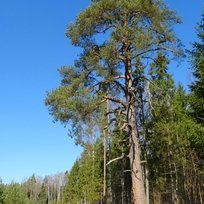