Formely, this stone was lying in a marshy area of Kurtuvėnai forest, not far from the hill of Rimas. It was preserved from destruction by an inhabitant from the village of Mekiai. For several decades, the man was keeping this stone in his farmstead. In 2008, upon the initiative of Kurtuvėnai community, the stone with ‘God‘s footprint’ was brought and put not far from its previous location, at the foot of Ribiškiai Hill.

People used to say about the unusual footprint, that the God left it having come down from the sky. Others used to say that it was an Angel flying by and leaving his footprints on the stone.

Over 150 of stones with various footprints were known in Lithuania. A great number of them was destroyed, split and used for construction. Those which remain, as a rule, are far from any residential locations, some of them are found near camps of the Stone Age, mounds and old burial-grounds.

The name of footprinted stones comes from the oblong prints, usually 10–40 cm long, 4–15 cm wide, and 2–7 cm deep (rarely larger). Some of them remind of the prints made by a human bare feet or a shoe, while others of some traces of wild or domestic animals. 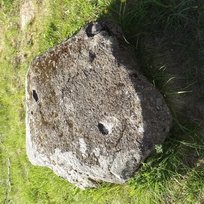 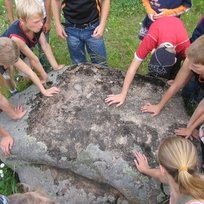 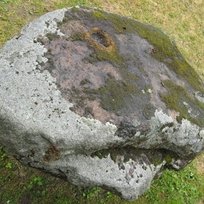