In the upper reaches of the river Dubysa, water mills began to be built after the uprising of 1831, as the construction of Venta-Dubysa  Canal failed. There used to be a straw-covered bridge over the Dubysa river. Therefore, the area is called Dengtiltis (dengti – to cover). For a long time, the mill belonged to the owners of Pašiaušė Manor, and at the end of the 19th century it was bought by Instenburg, a man from Latvia, and was rebuilt. After 1940, the mill was transferred to the Šiauliai Industrial Complex, and later to a collective farm. Currently the mill is in private ownership. 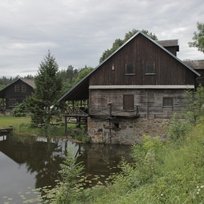